In a bizzare but albeit unsurprising move, the Security as a Service (SECaaS) company Cloudflare on 5th August, terminated service for 8Chan, an imageboard website. In this post I will discuss my opinion regarding this decision and how this ripple effect of online censorship doesn't solve anything.

Two mass shootings in 24 hours. One of many which have plagued the United States. Yet, nothing seems to be done. The issue is with gun control. Not video-games (an overused scapegoat) and certainly not the Internet.[1] In the case of the El Paso, Texas shooting there were multiple infleunces, such as white nationalism which has been on the rise since Trump took over the White House.

In a blog post on the Cloudflare Blog, CEO and Co-founder Matthew Prince posted that Cloudflare would be "terminating service for 8Chan." [2] I can only attribute this irrational decision due to sleep deprivation based on the time the post was published. But this is just a theory, nothing factual here.

It's a financial decision

Cloudlfare is a company. It has the freedom to operate (within the boundaries of the law) as it pleases. So it has every right to remove 8Chan as a customer. BUT.[3] The reason for this termination has no moral justification. I'd like to believe that Cloudflare believes in a free and open Internet. But based on past behavior that is probably not the case.[4] During the draft of this post I would later find out through a link on Hacker News that Cloudflare has filed for IPO. [5] So this would make sense as to why Cloudflare has blocked 8Chan from utilizing its services.

Cloudflare isn't the only service provider to have done something this unreasonable. In August 2018, the far-right conspiracy theory website Infowars was banned from services such as YouTube, Facebook and Spotify. [6] And like Cloudflare these companies can do whatever they want.

But surely I cannot be the only one who sees this as an issue? This is the Internet. In America we cite the constitution regularly and reference the first Amendment and how we have "freedom of speech." Yet, we know that freedom doesn't always mean free and it is quite limited. However, I truly believe the Internet is and should be a place where we get to challenge that. And not just people in certain nations but globally.

We have to give everyone a platform

We have to give everyone a platform. Whether we agree with them or not. As long as they aren't threatening the safety of others, they should be free to say what they want. This is why Liberals aren't as liberal as they think. Until their beliefs are challenged and they must actually question their liberty they're just posers.

Liberty on paper should be the same online and in person. We're not meant to agree with everyone. It's okay to play "devil's advocate" or hear the opinions of others to challenge our own beliefs. One doesn't have to let the echo chamber feed them.

Personally, the Cloudflare decision is very dissapointing. Because I've used their services for years. This website runs on Cloudflare.

Do you really believe that without 8Chan these mass shootings would not have taken place? These incidents were triggered by an idelogy promoted by the current President of the United States. When you refuse to denounce extremists you are not part of the problem. You are the problem.[7]

8Chan unfortuantely was a scapegoat for Cloudflare. A way to show potential investors that they "play by the rules" and aren't afraid to avoid controversy. As of this post 8Chan is unavailable on the clearnet. But I do not doubt that it or a clone will return. Because it's the Internet. Attempting to stifle free speech here is useless. When one site goes down, there is another to take its place just as quickly.

I think one of the biggest problems within our society is how coddled we've become. Groupthink is stronger than ever before and if you're not careful, sharing an unpopular opinion can ruin your career.[8] This is why I barely Tweet my opinions. Because the implications can be dangerous. For this reason, I tend to RT and only tweet what I can get away with. However, even that's not enough and the only place I feel somewhat safe at the moment is on my blog. Though even at times I am holding back.

Not everything we read on the news or online is true. The argument that this type of censorship is a good thing to prevent "fake news" from propgating is insanity. We must use logic, think for ourselves and see things for what they are, not what people write them to be.

I mean what I say

I am not sure if you're familiar with Clown Pepe. But if you're not, I apologise in advance.

Clown Pepe is a depiction of Pepe the Frog who wears a rainbow wig and a red nose (like sterotypical clowns do). And as "cute" as this character looks, it has been used to promote racist and anti-Semitic doctrine. This depiction, known as Honkler, appeared on 4chan, which by the way is a Cloudflare customer. I shit you not. Take a look.[9]

Here are some images of Honkler: 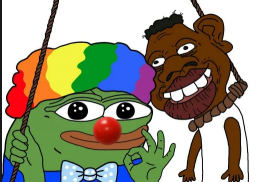 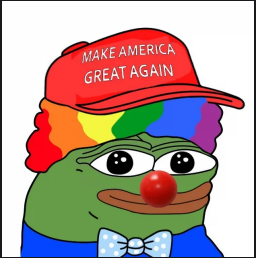 These images are also available as sticker packs on the messaging app Telegram. Yet, as an African-American I do not find them offensive. Though society thinks I should. I did not just discover racism yesterday. This is what you have to deal with as a human in society and this kind of content comes with the territory that is the Internet and I am fine with that. There is no need for one to petition that Telgram, 4chan or any other Internet service ban such content from their platform.

Because I mean what I say. We have to give a platform to everyone. This kind of content doesn't cause me physical harm. If anything, it provides a community for these racists to fester where they cannot cause the physical world any harm. Unless of course we don't have gun control then this becomes a bigger issue. Which unfortunately is where we are now.

Yet, without such a forum I believe such events would take place on their own for that reason. Censoring free speech on the Internet in the case of the US is solving the wrong problem. And I hope those in positions of power think quickly about their next move.